All I did Wednesday, April 10, was traveling to ClexaCon 2019. The flights took a little longer than expected, but I did manage to arrive Wednesday evening, so that I had the full Thursday for exploring Las Vegas, picking up my badge at the pick-up party, going speed friending, and meeting friends. For those of you who were unable to attend ClexaCon or want to relive the weekend, here’s how the pre-ClexaCon activities went!

PS I recorded a vlog during my travels, which I recommend watching to experience the ClexaCon festivities better. You can find the video below this image. 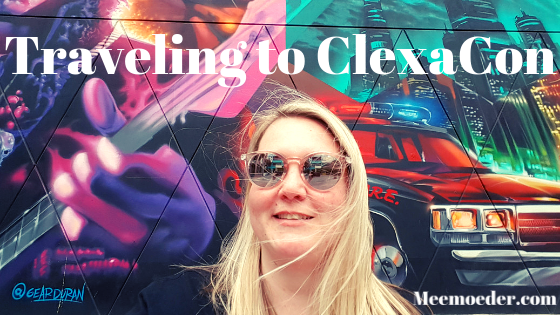 Traveling to ClexaCon 2019 from The Hague, The Netherlands

As you may know, a crowdfunding campaign was created to get me to Las Vegas. As a result, I was traveling to ClexaCon 2019 in April. The trip to the con did not go that well, unfortunately.

It started in Amsterdam with a United Airlines software problem. I had to wait for 2.5 hours before I could finally check my bag, which they had to do manually. UA delayed the flight for two hours so that everybody could be on it. Consequently, I missed the connecting flight that would take me from Chicago to Las Vegas.

When I arrived, they told me I was on a flight to Las Vegas the next morning, so I would have to stay in Chicago that night and only arrive in Las Vegas at 12:30 pm. That would be a total bummer, because I wanted to explore Vegas in the morning, take it easy on the jetlag, prepare mentally, and join the pre-con activities at 2 pm.

After asking, for an alternative, they put me on standby for a flight leaving that night. As it was somewhere around 4 am my time, I could not process things anymore. My mind just stopped working, so I simply stared at the screen showing the seats on the plane.

A white seat appeared after about an hour, so I ran to the desk asking if a seat was available. It was! All of a sudden, I had the golden ticket in my hand. Bye, bye Chicago; hello Las Vegas! At 10 pm, I was finally at Tropicana. That was four hours later than planned but still Wednesday evening!

Thursday morning, as planned, I went to downtown Las Vegas to explore the Fremont Street Experience and the hotels there. This was something I wanted to do for years, but somehow, I was never able to go there on my previous three visits. I had a blast walking around, and I especially enjoyed all the fun graffiti and signs.

After a quick nap, I thought it would be a good idea to visit the speed friending. Traveling by yourself to such a big social event can make you feel lonely, you know? That’s why I always recommend going to speed friending when people ask me.

Last year, it was an immensely popular activity, and indeed, this year they moved it to the main panel room so that all participants could sit. We had to answer random questions about our favorite TV shows, our job, ClexaCon, and stuff like that.

They told me I first had to get my press pass, so I actually already visited the pool party a little bit before speed friending. Last year, there were huge lines to get your badges, but the logistics were much better this year. The line looked very long, but it only took me 10-15 minutes. Also, I got to stare at some unicorns in the pool while waiting, so it wasn’t that bad.

After speed friending, it was time for the pool party. I was a little hesitant, though. I remember it being a little overwhelming last year, traveling by myself. The only reason I stayed so long the year before was that it was where I met my fellow Dutch press buddy Immy. This year, all the people I was supposed to meet were vendors and filmmakers, so they were busy preparing their booth or visiting the creative lab.

I was sooooo happy when I finally got to meet Lanie and Avon from Beyond Clexa www.beyondclexa.com. We met online a few months after ClexaCon, and they were the first ones to donate to the crowdfunding campaign that Emma (writer/director The Date) created for me. It meant a lot to me to see them IRL finally.

Avon and Lanie invited me to their booth, where they were still unpacking, and we talked for a long time. I did go to the pool party for a few moments to look around and meet some people. Still, Beyond Clexa’s booth quickly became my safe haven for the weekend. I ended up staying there talking to multiple vendors until that room was closed off and all the vendors had to leave.

One of those fun and unexpected @ClexaCon moments. I was hanging around the @beyondclexa booth and decided to take a picture in the shirt they just gave me. Right when I wanted to pose with their sign, @houseofvenskus walked by and joined. Just uploaded my blog post if you’re interested in other ClexaCon 2019 stories. Link in bio (or bit.ly/CC19Traveling) #clexacon #clexacon2019 #beyondclexa #representationmatters #queerrepresentation #brianavenskus #supergirl #thewalkingdead #agentsofshield #pridemode #PrideModeFan #lgbt #lgbtq #lgbtqia #lesbianvloggers #lesbianvlogger #lesbianbloggers #lesbianblogger #lesbianyoutuber #queer

I was supposed to have dinner with Emma and some of her friends somewhere on The Strip. However, my jetlag was giving me a hard time. Around 7 pm, I could barely function anymore. Socializing just wasn’t something I could do. I decided to go back to Tropicana (see, I did try!) and grab a bite on my way back to the hotel. Friday was going to be crazy so giving in to my jetlag was probably a good idea.

PS Have you seen the interview I had with Julia and Shantell from Girls Like Magic?