20 June 2018 / Greet / Comments Off on Watching South of Nowhere Again 10 Years Later: What I Realized

South of Nowhere aired in The States from 2005 to 2008. I thought it would be fun to watch the show again since Gabrielle Christian is coming to LOVE Fan Fest. Here are the three things that stood out to me rewatching this show ten years later. 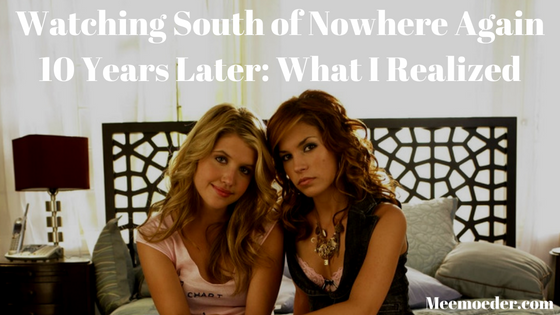 1.      In South of Nowhere, Spencer and Ashley seem to be apart from each other longer than they are together

South of Nowhere is often applauded for putting a lesbian teenage couple at the center of the storyline back then. Indeed, I was very happy about that ten years ago. Since then, the LGBTQ community often chuckles about how little affection was actually shown between them. The infamous scene of Ashley getting kicked out of the Carlin house was confusing to me at first. Were they even doing anything?

Later, when I saw Mandy Musgrave (Ashley) and Gabrielle in an interview about Girltrash, they stated they were happy that they were finally allowed to show the same degree of affection a straight couple would in a relationship.

Watching that infamous scene again now just made me laugh because a few weeks ago I watched Anyone But Me again, which aired 2008-2012, and as was said during the Anyone But Me panel at ClexaCon, Aster and Vivian had so many kisses and bed scenes, unlike Spencer and Ashley.

Are they together now?

That was not even what stood out to me now. I remembered their relationship but watching those two now made me realize how short the time is that they actually are together. Maybe it is precisely because they hardly show affection? Many times I was wondering about the status of their relationship: is this a friend phase, is this a friends-with-benefits phase, or are they together now?

I feel they faced more struggles apart from each other than together. Also, they hardly ever had to work things out together. This is often explained as Ashley pushing everybody away. To me, it is also an excuse for not showing the nitty gritty that every lesbian relationship faces just like any other real relationship faces. It would have been a great chance to show good queer representation but this writing did not allow for that. I can hear Deadpool saying: ‘Now that’s just lazy writing.’

In season three, Ashley said that the day at the beach felt like their first date. Wow. Yes, they took a break from school together. However, when Spencer confesses she is into girls, Ashley invites a couple of dudes that pass by to join them for the day. Her intentions, we learn later, were to protect Spencer from homophobic comments every single day. Still, turning that day into a big romantic gesture two seasons later just felt sad.

In short, I think it is safe to say that yes, showing that lesbian relationship was great but South of Nowhere did not delve deep enough into it nor did it allow enough time for good representation of an LGBTQ couple.

2.      With respect to Ashley’s sexual orientation, South of Nowhere was afraid to discuss the topic of bisexuality.

As I have become more aware of bisexual representation after ClexaCon, I was left wondering whether Ashley was a bisexual rather than a lesbian, as claimed.

In season one, she specifies that she had feelings for Aiden but that she is now into girls. That indicates some kind of a choice. In season three, Aiden is angry with Ashley and yells that she is a lesbian when she wants to be and straight when it is convenient.

The entire concept of bisexuality (or pansexuality!) does not seem to exist in the minds of the characters. So what if Ashley feels attracted to men and women? Why does there have to be a judgment in Aiden’s comment? After all, Aiden is portrayed as the more open-minded person, even though his male gaze is clearly shown in nearly every South of Nowhere episode. A different, more open-minded approach could have been taken.

3.      South of Nowhere addressed many issues that are still relevant today

South of Nowhere showed me a whirlwind of issues that still seem relevant today. Some of those issues are more relevant in the US than in my own country, though.

Obviously, it discussed issues within the LGBTQ community but then there were also the teenage pregnancy and miscarriage of Chelsea, Paula and Arthur’s marriage struggles, Glen’s prescription drug abuse and addiction, the high school shooting where Clay passes away, Aiden’s PTSD, the racial profiling Clay faces in LA as well as Clay’s struggles with what it means to be black (and what it means to be black in a white family).

Please keep in mind that the three seasons only consisted of episodes of 22 minutes. So many bad things seemed to be happening all the time! No wonder the creators did not have enough time to delve deeper into Ashley and Spencer’s relationship.

Ready for South of Nowhere at LOVE Fan Fest

I know this article sounds as if I do not like South of Nowhere. I do! These are just some things that stood out to me now, ten years after the context in which those episodes aired. All I can say is that I am glad that we have seen progress in queer representation.

I was stoked to see the announcement of Mandy and Gabrielle coming to Barcelona. Can you imagine my disappointment when I found out Mandy could no longer attend? It would have been so cool seeing those two talk about the show again. Still, I cannot wait to see Gabrielle discuss the show this weekend! You can follow me on my YouTube channel. As I did at ClexaCon, I hope to be able to film much material and talk to the guests.

Showing my Pride at The Hague Rainbow Festival 2018