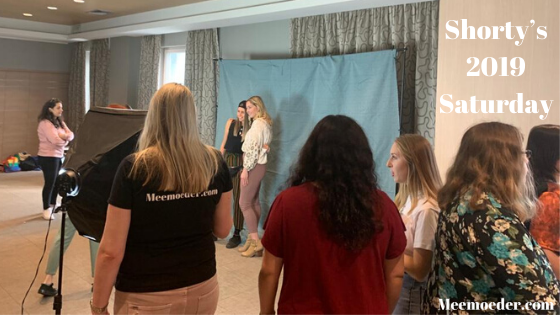 October 11-13, I went to Milan to visit my very first Wynonna Earp con. I usually attend LGBT+ and multi-fandom cons, but I wanted to know why a con focusing solely on Wynonna Earp is so unique and how gay-friendly such a con is. In this blog post, you will read how I experienced Shorty’s 2019 Saturday. I support my text with footage from the con. You will find panel videos, the opening ceremony, and my first vlog, which shows all the moments I describe below.

To Milan for Shorty’s

On Friday, I flew to Milan, where I arrived late in the afternoon. I knew I did not have much time to visit this beautiful city, so I decided to go to the most touristy area. The duomo looked stunning. I walked around the adjacent galleries and enjoyed some cannelloni before heading to the official con hotel. The Klima Hotel Milano Fiero has a shuttlebus and picked me up from the nearest train station, which was a big help! I saw some familiar Earper faces when I arrived, which assured me I had arrived at the proper hotel.

The start of Shorty’s

At around 8 am, I was ready to pick up my press pass. There was a long line, and they told me press was handled after that. I went back to my room because they told me I did not have to wait around. When I returned, the line was much shorter, and they simply wrote ‘press’ on my card, and that was it. Time for me to go into the con hall! I found a perfect spot on the floor, where I could stay low with my camera and still record what was happening on stage.

I noticed the con was very small, and not every seat was taken. Great, there was an intimate vibe already! I later learned there would be around 117 people. The opening ceremony started a little later than planned, and we could already tell Night Sky Events Italia’s organization was rather relaxed. We welcomed Melanie, Dom, Tamara, and Natalie with applause, and they told us that small groups were going to take turns going upstairs for the photo ops.

I have never been allowed into the photo op area, so I was surprised that I could finally learn what it was all about. I tried blending in with the walls at first, but later I just walked around to get the best footage. Everybody was super friendly and easygoing.  The photo ops started a bit slow, but then things started running. First the solos, then the duos, then the trios, and the group pic was last. It took about three hours to have everybody take their pics, but there was no rush at all. There was music, so people were dancing while waiting for their turn.

After a lunch break, three panels were scheduled with the guests who did not have a meet and greet at that time. First, there was a panel with Melanie and Dom, which you can watch below.

Then, there was a panel with Melanie and Tamara, which you can also watch.

It ended with a panel with Dom and Natalie, which you can find here.

It never ceases to amaze me that no matter how many panels they have done, you can always discover something new and laugh about some hilarious story. And you know that when Melanie starts asking her colleagues questions, they will be good.

After the panels, it was time to go back to the photo op room, which had now turned into the selfies and autographs room. Four long lines were formed, and people had the chance to get the guests’ autograph and take a selfie with them. I told you the morning was very relaxed, but by this time, at the end of the afternoon, everybody was getting tired as well. This led to an even more laid-back vibe. You could tell people were getting a little less nervous about meeting the cast (there are always exceptions 😉) and starting to make friends.

A party was planned later that night, but I did not buy tickets for it. Instead, I went for dinner, uploaded one video, and edited another. If the explosion on my phone tells me anything, it is that you greatly appreciated my late-night activities.

I liked how Night Sky Events Italia organized everything in blocks. That allowed the entire con to be revolved around the same activity, which in turn allowed for shared experiences. At some other cons, I see people running between panels, meet and greets, photo ops, and autographs just to be on time everywhere. The advantage of such a small con is that you can reduce everybody’s stress by keeping things simple. A warm thank you to the volunteers, interpreter, and the people in charge!

You can find all my Shorty’s blog posts here (updated regularly). Please subscribe to my YouTube channel. It really helps me when I organize trips to cons. Also, could you support me on Ko-Fi? This online tip jar helps me buy new vlogging equipment. That means you can help me improve the quality of my videos.

Emily and her Mums: Children’s Book for Same-Sex Families