At Love Fan Fest, I was allowed to talk to Shannon Beveridge for a while, who is the genius behind YouTube channel nowthisisliving. I really appreciated this moment as I have just started my own YouTube channel. Being able to talk to somebody with over 600k subscribers is a chance you hardly ever get. What can you do with such a platform? What does such a platform mean to others? Also, what does she WANT to do with it?

In this blog and vlog, you will find out more about Shannon Beveridge, whom I think is very talented, caring, and chill. She talked about characters she felt attached to as a teenager, YouTube censorship regarding LGBTQIA topics, and visiting conventions. 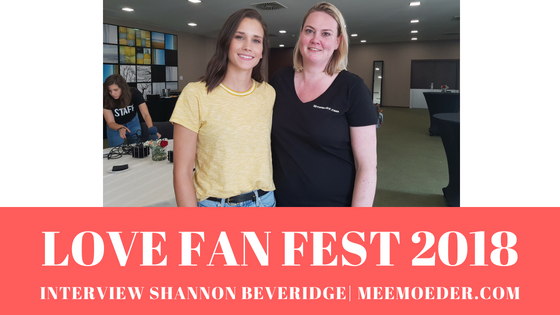 Below, you will find a video of the entire interview. I was not the only press member present during this conversation so you will sometimes hear LGBT Fans Deserve Better. If you liked the video, would you give it a thumbs up, share it with your friends, and subscribe to my channel? That would help so much. Thank you!

The other press members and I were brought upstairs to the relaxing room of the guests. There, Shannon was chilling on a couch and jumped up the moment she was asked whether an interview would be okay: “Let’s do this!” I loved the enthusiasm! We decided to all sit at one big table so it would not be a separate interview per media outlet but a joint conversation. That felt very organic to me (but the lighting in the video is a bit off).

An interesting topic to me, which was also addressed rather quickly by LGBT Fans Deserve Better, was how YouTube’s rules regarding LGBTQIA content have affected her the past two years or so. After all, it is increasingly harder for us in the LGBT community to start or maintain a YouTube channel. The horror stories that I have heard from multiple YouTubers made me worry about starting my own channel. Would it even matter?

Maybe you need some background information to understand that question. I have a simplified version for you. If you put the words lesbian, LGBTQ or something similar in a video title, the video will often immediately be considered not advertisement-friendly. If videos are demonetized, YouTube is not making money off them either so the videos are not shown in suggested videos. That means viewers will not organically find your videos; they will actively have to search for them. If you do not put those words in your title, how is the audience that actively looks for these videos going to see your video? It is simply not a fair system.

If you want information from other LGBTQ YouTubers, these two videos are great examples: Bria and Chrissy and Michael Rizzi.

Shannon admitted it was getting more difficult to get content to reach the people who need it the most. She gave a very elaborate explanation of how quickly videos become demonetized and what the effects are of that. First of all, creators do not get paid for their work and without resources, it is harder to make this content. Still, she feels she wants to make videos because they mean something to her viewers. However, if her video gets flagged, it takes about 24 hours to be reviewed. That is also the period you see the biggest jumps in views. As a result, it is hard to get in the suggested videos list after the review, gain a good spot in search results, etcetera.

Another issue she talked about is YouTube’s Restricted Mode. LGBT content often ends up being blocked in the restricted mode. Who uses restricted mode? Public schools, public libraries, and conservative parents do, she said. So, when you cannot watch those videos at home and you cannot go to your library or school, where can you watch this content safely? Man, I remember what it was like not knowing of any representation. I do not wish that upon anyone else!

I wanted to know whether Shannon had any practical tips for me. After all, our community will not be getting answers from YouTube itself anytime soon. For instance, would she advise me to put lesbian, LGBTQ or something similar in the video title or not? What does she normally do?

Shannon said that she usually does not put these words in the title. She wants to make her channel about more than just lesbian or LGBTQ topics even though it is a big part of her channel and many of her followers are queer.

However, if she does talk about it, she does put the word lesbian or something similar in the title. One example is ‘Lesbian interviews ex-boyfriend’. She told me to put the words in the title because I am specifically targeting that audience and they will search for it. Also, ‘Lesbian interviews ex-boyfriend’ did not get flagged. She called YouTube’s policy a crapshoot; you never know what will happen.

See, that is exactly what I needed: advice from someone with experience who has seen the changes herself.

Shannon Beveridge was asked whether she sometimes feels pressured to make content that she did not want to create. She told us that she feels much freedom. However, she also feels that her viewers want her to release four videos a month and that she does not know how to give that to them. She sometimes asks herself what is left to give as “you already know all of my soul.”

I sensed she was at a point where she was wondering what the next step would be for her channel. Coincidentally, she posted a video about two weeks ago, which completely differs from her other videos. It is about her trip to Spain, Love Fan Fest and other parts of Europe. It looks very creative and it has a different vibe, right? I would not mind seeing more of this!

I hope you liked this description of the interview at Love Fan Fest. I thought it would be more fun than simply publishing a page stating the answers and questions. Next week, I’ll go back to the chronological order of my Love Fan Fest experiences. Last week, something happened that made me move away from the content schedule I had originally planned for you. As a result, I had no more time to add a blog to the videos I posted online. Sorry about that! Anyway, here they are and I hope to see you back as subscribers on my YouTube channel if you have not subscribed already!