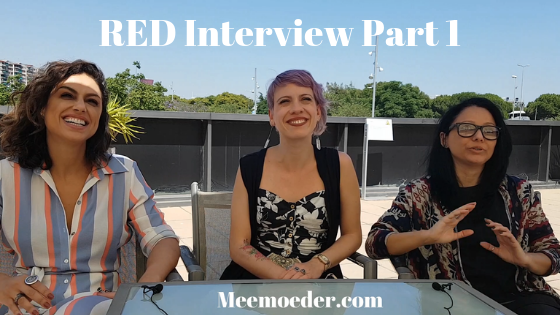 The most magical moment of Love Fan Fest 2019 for me was the interview I had with Ana Paula Lima, Luciana Bollina, and Germana Belo of RED. In this part of the RED webseries interview, we discussed the current situation for LGBT+ people in Brazil, the beginning of RED, and the series up to season 4. Next week, the second half of the interview will come out, which will focus on season 4 and 5. Below, the questions and answers have been written down, but you can also watch the video under this image.

Me: “I was really happy to see that you were announced to Love Fan Fast this year. How has it been so far? You have had your first morning. Have you had nice meetings with people?”

Luciana Bollina: “Oh, such nice meetings with people and to know people from other countries. It really, really makes me very happy because I know about people’s lives. And we have a chance that people can get to know us, and our show especially, because I think the majority of the people here knows RED but not everyone. So, it’s very good to share.”

Ana Paula Lima: “Yeah, they’re really open to getting to know you. And they’re really special in the way that you feel embraced. That’s… I don’t want to use the word special again, but it is an amazing experience.”

Me: “Ah, that’s great. I think… What you say, people are really open to high-quality queer shows, and your show is definitely beautiful. It’s something else.”

The current situation for LGBTQ people in Brazil

Me: “So, I’m not from Brazil. Can you help me understand what the current situation is for LGBTQ people in Brazil? Because I get mixed messages. For instance, can people walk hand in hand in the streets, or is it too dangerous?”

Germana Belo: “Yeah, it’s definitely not like a safe space or a safe place for LGBT people because… This is what the numbers say. We are the number one country that kills LGBT people.”

Germana: “It’s a reality, but I think it depends on the kind of circle you live in. For me, I don’t feel that so much as an LGBT woman. I can say I kind of live in a bubble because some people live like that. The circle of my friends and family, they are all very accepting, but I know this is not the reality for most people. And people get killed every day because they are trans, gay, and lesbian. And we know that happens.”

Germana: “Fortunately, I live in one of the biggest cities in Brazil. So, it’s easier for anyone who lives in the capital, with more open-minded people. Even though bad things would still happen, it’s better for us. But I know it happens. As I said, we kind of have this privilege of living in a place and circle that is more accepting.”

Ana: “There are more people that are more open-minded.”

Germana: “Yeah, in a circle with creators and people who are open to, you know, differences, whatever they are. But the reality of the country, in general, is that it is not a safe place for LGBT people.”

Me: “So, you are the first lesbian webseries in your country. When season one dropped, what were the first responses that you received?”

Germana: “Because we didn’t have money for marketing, the feedback, in the beginning, was very slow. We received great feedback, but it was a small number of people. The way we promote our series is very organic. So, people like the series and tell their friends to watch it. So, it demands time. By the time of season 2, it really began to create a larger fan base. But really because we didn’t have a way to market the series better. So, we had to wait for people to come to us.”

Ana: “It was really positive feedback. We never received something that wasn’t nice, you know. Everything that happened with RED happened in a really special and positive way. Like having an experience outside Brazil. Getting nominated in other countries like ‘oh my God, look at what they’re doing’ and we’re like ‘oh my God, yeah, we are.’ It’s amazing. I think we always manage to figure out what’s always positive.”

Germana: “Sometimes I joke because our feedback is mostly positive. And sometimes I joke saying: ‘Okay. When we start getting haters, it is probably because we really made it.”

Germana: “Because so far, we are in a niche. The people who come to us are the people who like it. The time we manage to reach people who wouldn’t like it, you know, it’s when you start to become mainstream. You would reach a large number of people, and some of them could not like it.

So far, mostly, our feedback is very positive. We have a lot of feedback because it’s also part of the project. The idea of RED is interactive feedback. We talk with our fans through our social media, through our personal social media profiles and RED’s profiles.

So, this is also part of the project. Nothing is separating us from the people who watch the show.  We talk to everyone. We have a lot of channels, like Instagram, Facebook, and Vimeo, so feedback comes from all over our channels. And it’s great.”

Me: “RED originally started with two actors who have a relationship on-screen and then fall in love off-screen. I think that’s basically every fan’s fantasy here at Love Fan Fest. Some fans see a couple on-screen and then think it’s in real life too. How many actors have told you: ‘thanks for feeding that idea. Now I get that even more?’”

Germana: “That was not random because I am this public. I know you because I am you. So, I know this is the general fantasy of everyone. We were thinking about telling a love story between two women, but this could be, like, whatever. And I thought: ‘Okay, maybe it would be interesting to have that.’ That is a fantasy of every fan, to have two actresses who work together fall in love. So, it was not random. Because we knew it was a fantasy.”

Me: “I thought it was pretty clever when I first saw it. Anyone in particular you had your inspiration from?”

Germana: “No, the main premise is just this fantasy that was the inspiration: the fans’ fantasy of having two actresses together.”

Me: “At ClexaCon last year, you [Ana and Luciana] both said that when you read the script for season 4, you both had moments where you were like: ‘I’m going to call Germana and ask her if she’s sure.’ We hadn’t watched season 4 yet, and I always wondered what the exact moments were that you were like: ‘are you sure? Is it a good idea?”

Luciana: “Yeah, it gets worse. It’s because we are fans of the characters.”

Luciana: “I usually watch my interpretation in something, but not here. I really enjoy the love story here. We always talk to Germana like ‘Germana, why?! What is happening?”

Next week, I will publish the second part of the interview. There, we talk about season 4 and 5 in more detail. In the meantime, you can enjoy these other videos and blog posts about Love Fan Fest 2019.

Please consider buying me a virtual coffee. The online tip jar on the right of this page helps me purchase new, much-needed vlogging equipment.