On the final day of ClexaCon London, Mandahla Rose and Nicole Pacent visited the press room together. They are in Passage together, which will come out in 2019. They talked about other projects they have been working on, about queer and non-queer actors playing queer characters, and about mental health. Because the interview was so long, I have divided into two parts. Below, you will find Mandahla’s part and here, you will find Nicole’s part. 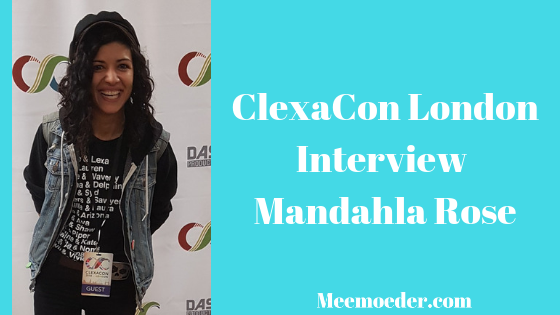 Me: Mandahla Rose, you just said that you still had so much more to say in your panel. What were some of the things you wanted to talk about?

Mandahla Rose: It was about mental health. The question was about how people reach out to you. So, I have been reached out to by a number of people but one person in particular. This is a trigger warning. She heard me speak about my own vulnerable story, how I tried to take my own life, and it ended up saving her life. To me, if this platform is something that I can be on that can just save one life, then I am doing the right job.

Unfortunately, Tessa did pass away. Not by her own hand but it was because she ended up having a heart defect. So, the wonderful thing that I can take from that is that she could have gone from darkness and sadness in her heart. But what I ended up doing by speaking my truth is actually allowing her to go ask for help, let her family and friends know that she needed help.

She actually got that help. She met someone in care and ended up marrying and moving to Paris. And she had this beautiful, just six months of a new life where she has light and love in her heart. Unfortunately, she did leave but she left with that and love in her heart. So, this platform that I find myself on is wonderful for that reason. If just one life, that is life enough.

Mandahla Rose: Let’s first talk about Passage because we are both in Passage. Do you want to…?

Nicole Pacent: You are a bigger part of Passage so why don’t you talk about it?

Mandahla Rose: I play agent Diana Atwell, a Caelus agent. It is Sci-Fi and it is kind of, I do not want to give it away, I can’t… It is going to be… I am very excited about it. I did spend a day at the graveyard running around, which was a lot of fun, with guns and everything.

My other project is BIFL. I won’t tell you what that stands for. Does it stand for anything? We don’t know. Find out. I play Sarah, they/them/their, ace lesbian. It is a lot about representation. It is an ensemble cast so there are six of us. Each of us has our own stories to tell. So that one was really exciting as well.

Forever Not Maybe will be coming out next year. It was originally La Douleur Exquise, a web series that ended up… Shot the first episode in December 2015, which was a while ago but that is the actual reason for me moving to LA in the first place. We were actually able to get the funds to turn it into a feature film. So, now called Forever Not Maybe because good luck pronouncing La Douleur Exquise. So, that one will be coming out next year as well.

Crazy Bitches season 2, I play Pandora, a 20-something YouTuber. I am a little baby lesbian in it, who has a bit of a crush on Guinevere Turner’s character. Then, Guinevere and I are in a series called Alice & Iza, which will be coming out soon. It is based on a one-night stand, which is a little bit of fun, on Tello.

Nicole, you have said on a panel that you have feelings about how important it is for openly queer actors to be playing queer characters. Would you mind going into that a little bit more?

Mandahla Rose: I think there is a fine line because I can see the “straight” world be like “Well, if you think queer actors should be playing queer characters, then straight people should only be playing straight characters.

Nicole Pacent: Yes, it does work opposite.

Mandahla Rose: It does. But in saying that, we are more than our sexuality. I can play a straight person and a queer person. It is still a talent. It is the talent we should be looking at, not the sexuality. But, again, I really love when… I mean, it is really heart-warming when queer actors are playing queer characters because the straight guys get them all the time. The straight people get everything.

Nicole Pacent: Is it going to take more effects and camera tricks for them? Yes. We definitely were party to that, we could see that happening but luckily, I got to get home and be like “Bye!”

PS here are my interviews with Kat Barrell, Natasha, Elise & Annie, Jamie Clayton, the team behind I Can’t Think Straight, the writer and producer of Different for Girls, and the directors of ClexaCon.

The Importance of ClexaCon According to Its Directors