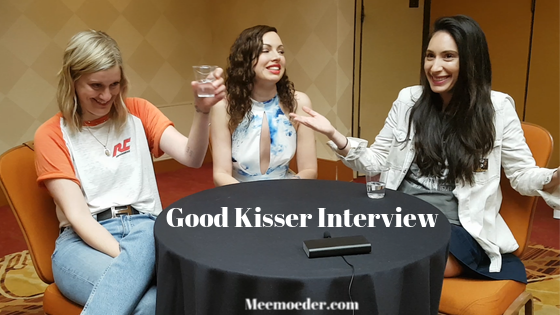 A few months ago, you were able to read my review of Good Kisser. At ClexaCon in April, I was able to interview the cast. I had not watched the movie yet, but I did have some questions for Rachel Paulson, Kari Alison Hodge, and Julia Eringer. You can read my interview with the Good Kisser cast below this image or watch the video.

The Good Kisser cast is preparing for the premiere

Me: “Am I correct that you had your premiere last night?”

Kari: “It was a sneak preview.”

Julie: “No, we’re having our official premiere at the Seattle International Film Festival, which we’re really excited about.”

Me: “How was the response yesterday?”

Kari: “It was great. People were laughing, like so, so much.”

Rachel: “I keep saying, I didn’t realize how funny the movie was until I watched it, and I was in a room of people that were laughing hysterically.”

Julia: “It was really funny, and I think not just to us, who… Obviously, we find each other and the situations we’ve been in funny. The jokes were landing, and it was great.”

Me: “Were people also laughing at things you didn’t expect?”

Julia: “Definitely. I didn’t expect half of those laughs.

Rachel: “Same. I was literally like oh, well, that was funny. But when I was laughing, the room was laughing with me as well.”

The Good Kisser cast may have been nervous

Julia: “Yeah, we were very nervous.”

Rachel: “I was like two drinks in. You know what I mean?”

Julia: “Rachel was the most nervous.”

Rachel: “I was the most nervous. Definitely.”

Julia asks Kari: “Were you nervous?”

Kari: “I wasn’t nervous to see it. I was just nervous about the Q&A afterward.”

Julia: “They asked us what it was like to watch it. And yeah, we said the same thing about the comedy and also when the sex scenes were coming up. I was going to Rachel: round one! Okay, round one done, now round two, what’s that going to be. You know, because there are three rounds.”

Rachel: “Yeah, we were sitting together like: here we go! We were all holding hands.”

Julia: “Yeah, it was fun, though, because I don’t know about you guys, but I relaxed pretty soon. As soon as I saw that beautiful drone aerial shot, right at the beginning, I was like: this is beautiful.”

Julia: “We’re okay, and it’s always nerve-racking because if you haven’t seen the film and you’re watching with a bunch of other people, you just don’t know how it’s going to go.

Besides sex scenes, what more can we expect from the storyline?

Me: “Can you tell us what the movie is about, for those who don’t know? We now know there are sex scenes in it.”

Rachel: “Many, many sex scenes.”

Julia: “Spoiler alert. It’s about three people. These two gorgeous ladies play a couple, and I play a very independent woman. We have one night, a date night, the three of us, where we’ve arranged to spend the evening together and just see what happens.”

Rachel: “That is the best interpretation of the movie. I really like that. It was so cute. I was so much harsher than you guys. It takes place in one night. Essentially, we decided to spice up our relationship to bring in a woman, and there are some secrets unraveled.”

Julia: “There are a lot of secrets, for sure. Everybody’s keeping secrets.”

Rachel: “That’s what makes it interesting.  Every character has at least one thing they’re hiding from the other two characters.”

Me: “What drew you in? Was it the comedy or something else?”

Kari: “I was drawn in more from the emotional side, not from the comedic side. From the different levels of power between each couple, and the self-esteem issues, and all the idiosyncrasies of each character and how they interact.”

Julia: “Yeah, it’s funny. I think any time you have three characters in… It takes place in one location one night. That’s very, very intimate, you know. If you don’t like the three of us, you probably don’t like the film because it’s us. It’s us the whole time. Because of that, you really get into these three characters, and you see the dynamics at play, and the politics between all of them in the different relationships that are there. I love movies like that.”

Me: “Is there anything that stood out to you while filming? Maybe a scene?”

Rachel: “Yeah, I think the mask scene. When we all saw that, we were kind of like: oh, that’s what they were doing.”

Julia: “When we were shooting it, it was incredibly awkward at first. Incredibly awkward. And we were just relying on each other and feeling out the moments. Because we were doing some very, very intimate things, and there was a crew of people watching us like a theater show. But we were just kind of winging it. We were just like: what’s happening?”

Kari: “Yeah. And oftentimes when you watch a movie and characters are dancing, they don’t get music when they’re acting. Right? So, we’re just dancing to no music for most of the takes. It feels…”

For the Good Kisser cast, it sometimes felt like a play

Rachel: “Right. And if you’re dancing with someone in real life, there’s probably music playing. And when you’re making out, and it’s getting to this place where you’re starting to become attracted to each other, there’s not a room full of people watching you. And, like you were saying, it was a lot like a play. We were playing out this entire scene, a long scene, and it was really blocked out. We had to hit all of these different areas, and we were walking through this whole scene. And we were like: how are they even going to edit this? I didn’t understand, and then we saw it, and we were like, oh, I get it.”

Diving into their characters

Me: “Are the characters close to you in real life, or did you really have to dive into them?”

Kari: “For every character that I do, I completely create their own history and their own memories. So, I’m never mixing my personal history with the character. That’s just how I work.”

Rachel: “I’m the opposite, which is interesting. I always try to pull pieces of the character from my own… I also do the background thing, but I try to pull pieces of whoever I’m playing from my actual experiences. Because I feel like that helps to ground it for me. I think that’s cool that you do that and I do this, and it’s a completely different thing. I definitely think Kate has some things that are mine. She also has some things that aren’t mine.”

Julia: “I guess I do a combination. I’m playing her so there’s a lot of me in her but… And again, as Rachel said, I will try to use things. You know, I’ll try to use things that turn me on, when Mia is going to be turned on rather than fabricating things that would turn Mia on and try to get turned on by those, for example. But yeah, she’s very different from me. Probably it was the biggest jump for someone, me from Julia to Mia. I don’t know; for me, it seemed quite a big jump. She’s just very free, very experimental. She marches to the beat of her own drum. It was a challenge for sure. She’s fun.”

When and where can you watch the Good Kisser cast and movie?

Want to read more about ClexaCon 2019? I’ve got you covered!

Twenty a Webseries: Interview with Lily Richards and Caitlin Combe

Conspiracy of the Dark Giveaway!