At Love Fan Fest, I was able to talk to Gaby Christian for a few minutes. We talked about Love Fan Fest, traveling, and, obviously, South of Nowhere. This interview was not planned, so it was not very structured or anything. We just chatted and since I was slightly nervous, I may have rambled a bit 😉 Below, I have written down what we talked about but if you just want to see the impromptu interview for yourself, you can find the video below this image. 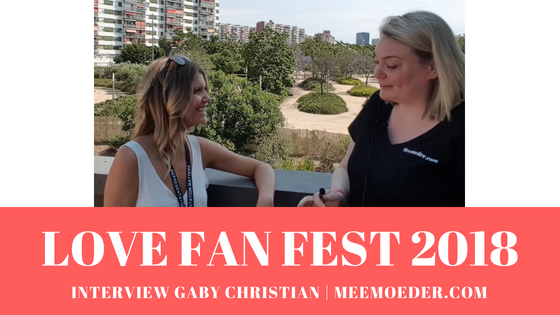 On her Instagram page, Gaby Christian has shown us some beautiful travel pictures before Love Fan Fest started. Therefore, I want to know what it is like for her to come to an event like Love Fan Fest after spending much time in nature. She says that Love Fan Fest has been great so far. Visiting Barcelona is rather “wild” after visiting small villages and nature. She has done some Gaudí sightseeing and gone to the beach.

I respond that I have gone to the beach as well because, in The Netherlands, summer is usually rather bad (it turned out not to be bad at all, by the way!). I ask Gaby Christian if she has ever been to The Netherlands, given the fact that she travels a lot. She tells me she actually has and as it turns out, she has spent some time in The Hague, which is where I live. That surprises me because tourists usually stick to Amsterdam (if you ever visit my country, I urge you to look beyond Amsterdam!)

Things become quite funny when Gaby asks me if I know her friend. One specific person in the country’s third biggest city? I do not… She starts laughing and tells me how she hates it when people do that to her when they find out she lives in LA: “Most likely… not…”

I ask Gaby what it is like for her to have people still come up to her and talk about South of Nowhere, even though it has been over a decade that the series was on TV. She tells me the show is fourteen years old now. I try to remember when I first watched it and I say it was probably around 2006.

She indicates that they shot the series from 2004-2008 so that 2006 is possible. She asks me whether it was on TV or something. I cannot remember where I watched it; I know it was not on Dutch TV but I remember searching for any lesbian storyline and finding SON. When I think about it now, it must have been when I was studying in the States (late 2005) or when I visited again shortly after. So, it might have been on TV after all…

Anyway, Gaby explains that more people find their way to the show now because it was on a small network back then and it is now digitalized. That makes sense! Also, that is kind of funny, to have a few years pass and then people rediscovering you.

As you may know, I have rewatched South of Nowhere right before Love Fan Fest (because why not?):

When I binge-watched the show, I noticed that so many things were happening at the same time: Spencer’s coming-out, the high school shooting, Clay finding out what it means to be black (including in a white family), Chelsea’s teenage pregnancy, Glen’s addiction to painkillers, marriage problems, and so on and so on…  I noticed that, unfortunately, all these things are still relevant today. Maybe they are even more relevant given the political climate we are in? I ask her if she feels that way too.

What Gaby thinks made the show so special is how simple and real everything was. Now, with CGI and all the technology, everything is enhanced and sensationalized but, in that time, the show felt gritty and real to her. She feels its simplicity was beautiful and she is not interested in the glitz and glam. Even the romantic moments between Spencer and Ashley were relatable. An example she mentions is La La Land, where everything is perfect; in real life, things are “not perfect, ever.”

This makes me think of another question I have. Growing up in the Netherlands and going to a particularly nerdy high school, I was always wondering whether things I saw on TV were actually the ways things happened in the USA. Yes, some of the things I saw on TV happened in my environment as well but not everything and certainly not to the same extent. So, I ask Gaby whether the high school in SON is a clear representation of a high school in LA.

She thinks so. Similar things would happen at her high school. She does say LA has the added bonus of wealth and celebrity parents, like Ashley’s dad being a rockstar. That certainly makes things more entertaining but probably not so relatable.

Speaking of Ashley, Mandy Musgrave could not come to Love Fan Fest. She was supposed to come but she had to cancel. My heart broke a little when I heard the news (but I am fine now, you guys, thanks!)

I am curious to find out whether Gaby misses her on an event like this. After all, it focuses on a couple they brought to life together. Gaby starts laughing and admits it is weird being at Love Fan Fest without her. She thinks Mandy is great at this stuff, being the extrovert. Gaby claims she is the introvert who usually just cheers Mandy on. Thankfully, she has found a pseudo-partner-in-crime in Rhiannon Fish. Well, Gaby, I can tell you that you are great at panels and interviews all by yourself too!

Still, I would not mind seeing both Gaby Christian and Mandy Musgrave on a panel, amirite?