Last week, I told you about my ClexaCon Friday adventures, where I was trying to find the bus tour and failed miserably. I also tried to pick up my press pass at the I Can’t Think Straight screening and failed miserably. On top of that, I tried to go to the badge pick-up party only for a little while but failed miserably. So, I started ClexaCon London Saturday off in a tired but excited way. Below, I explain what I did! Also, for fun footage, please check out the video below this image. 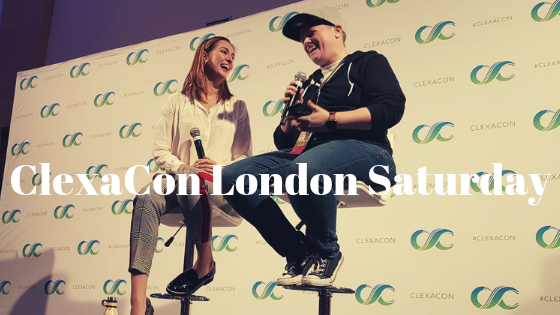 Because I had so much fun at the badge pick-up party, I was a little tired when I woke up. However, at these cons, you basically live off adrenaline, so I knew I would be fine.

I first tried to find the press room because I just wanted to know what kind of atmosphere I would be working in for these two days. Also, I was curious to see what other press members there were and who I knew from previous events and social media.

Well, I can tell you that the press always has a fun time together, being stuck in that room for these high-pressure moments. Well, I still consider them high-pressure moments; I’m sure the press members who have more experience with these cons are more relaxed. I actually got laughed at for being nervous again before the interview Kat Barrell! I can’t help it: it’s still surreal to me that I get to be there and interview these people that I admire! So laugh all you want :p

Because vlogging is an exciting part of my trips to these cons, I decided to film everything I came across when I started exploring the convention that morning. The abundance of unicorns made me very happy and there were already autograph queues at 9:30 am! The vendor part was much smaller than the Las Vegas vendor part but the essentials were there: queer books, shirts, magazines, and accessories. I also quickly found the main panel room and the smaller panel rooms.

I immediately noticed it was a very smart location for this pop-up ClexaCon event. They wanted to make it a much smaller and more intimate con than the Vegas one. Working with two floors definitely brought that vibe. The press room was on the lower ground as were the rooms for the Q&As and the photo ops. So, leaving or entering the press room, we occasionally bumped into some long lines but you did not see those on the main floor. That made the main floor a more active area but not with too many people. If you had troubles with large crowds, I think this con was less overwhelming than the Vegas edition.

I had to come back from exploring quite quickly because Kat’s interview was scheduled at 10 am. Like I said, I was nervous again. I had two questions that I really wanted to ask her. Plus, I had a bunch of questions from my Instagram followers. With only 15 minutes of time and many other press members present, I could not ask the questions from my Instagram followers, unfortunately. I was really happy I got to ask my two questions though. And, I think she may have recognized me from Love Fan Fest. She really is the sweetest and she takes the time to answer your question to the best of her abilities. I appreciate her dedication!

After the interview, I made sure to take some time to edit the footage and put it online immediately. You can watch it here. I was able to talk to some of the other visitors after that, which is exactly the reason why these cons are so much fun. They really do create a sense of community and talking to everyone else present is just so wonderful. You don’t feel as if you stand out. Nearly everybody is part of the queer community so these are the moments you are the majority.

After lunch, I went to the I have a que(e)ry panel. It “explored where non-binary and gender non-conforming people fit within gendered, queer spaces.”

There was one issue they talked about that I had never even considered. If you identify as non-binary and you are in a relationship with someone, are you then straight or queer? Are you part of the queer/LGBTQ+ community or not? Whoa!

Then, it was time to visit Kat’s panel. It was her first panel by herself so that was special. I think we learned quite a few things. For instance, I now know she was an Uber driver for quite some time. She described that as being very helpful being an actor studying people. I loved how she talked about the pants she wore in season 1 and how her outfits changed over the season. At times, it was fun and at times, it was heartwarming.

Next week, I’ll talk about the rest of my ClexaCon London Saturday adventures. In the meantime, don’t forget to subscribe to my YouTube channel! I upload a new video every Wednesday that discusses LGBT+ events or movies.

PS here are my interviews with Natasha, Elise & Annie, Jamie Clayton, the team behind I Can’t Think Straight, Nicole Pacent, Mandahla Rose,  the writer and producer of Different for Girls, and the directors of ClexaCon.