As you may have read last week, I visited Kat Barrell’s panel on Saturday as well as the I have a que(e)ry panel. In this final ClexaCon London blog post, you will read more about my ClexaCon London Adventures: all the interviews I had and the panel by Natasha, Elise, and Annie. It also helps to watch the video below this image because it allows me just a bit better all the things that have happened. Also, please don’t forget to subscribe to my YouTube channel. 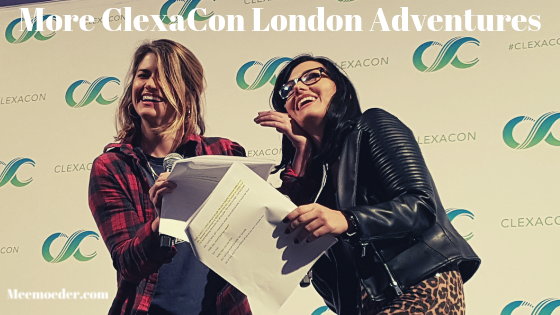 That afternoon, we had a press moment with Jamie Clayton. I absolutely loved her presence. I’ve said it before but what an energy! I’ve learned quite a lot even though her interview was only 15 minutes.

You can read about it here: Jamie Clayton (Sense8) talks trans representation at ClexaCon London. Also, you can watch the video below.

The panel by Natasha, Elise, Annie, and Dana

Dana Piccoli moderated the panel by Natasha, Elise, and Annie. First, it was just Natasha and Elise. As always, Dana had a fun idea for them to act out. On previous panels, she made them act out scenes from famous movies.

This time, though, she wrote a Hallmark-inspired holiday movie called Boughs of Holly. It always makes me laugh to see Elise and Natasha’s face right before she announces what she will make them do. Can we make that movie happen?!

Then, Annie joined and it was fun to see how dynamics change when there are now three people being interviewed.

An interview with Natasha, Elise, and Annie

Right after their panel, we had to return to the press room because Natasha, Elise, and Annie were coming for an interview. As I expected, ClexaCon London turned out to be Annie’s first con. I thought she brought some interesting insights to the table.

For instance, she reminded us that it takes a lot of time and effort for actors to work on their craft, training and auditioning in between projects, which we as an audience don’t always know about. We just see them on the screen when they are working on a job.

You can find the interview here: Natasha Negovanlis, Elise Bauman, and Annie Briggs visited ClexaCon London. Also, you can watch the video below.

After this interview, I took some time to record some vlogging footage. That meant I headed to the main panel room for Jamie’s panel a little late. When I walked to the panel room, I saw that the autograph lines for Natasha and Annie were a little slow. Apparently, everybody was at Jamie’s panel or in one of the other rooms. As I really wanted to have a quick interview with Natasha about Freelancers Anonymous, I took the opportunity to talk to her about it.

That sounds very proactive of me. In reality, I walked back and forth like ten times 😉

She said she wanted to but that she could not do it at that very moment. She thanked me for trying to promote new LGBTQ+ projects with my channels, which was amazing. I gave her my card to give to her agent, so we could make it happen.

After that, I talked to Holly, one of ClexaCon’s directors and I learned that they as an organization really like what I do with my blogs, vlogs, and social media posts about ClexaCon. That gave me such an intense feeling of happiness you guys. I can’t explain.

And then, Natasha’s agent walked up and said we could do the interview RIGHT NOW. No time to be nervous. Oh, wait, that happened anyway, of course. That moment, Holly also told Natasha’s agent that I am one of their favorite publications. It meant so much to hear that. Plus, more nerves…

I was allowed to go “backstage” and talk to Natasha. She answered a few questions about Freelancers Anonymous and made sure everybody watching pre-ordered the movie (the interview was released three days before the release date).

You can read it here: Freelancers Anonymous: The New Queer Movie for Everybody. Also, you can watch the video below.

Emotional after all those ClexaCon London Adventures

I’m not going to lie; I was a little emotional after that afternoon. I missed Jamie’s panel but had so much in return.

That Sunday, I had a few more interviews. I did not see much of the con anymore because I already had to leave at 3 pm.

PS here are my interviews with the team behind I Can’t Think Straight, Nicole Pacent, Mandahla Rose,  the writer and producer of Different for Girls, and the directors of ClexaCon.

BiPositive Podcast Interviewed Me. This is What We Talked About!