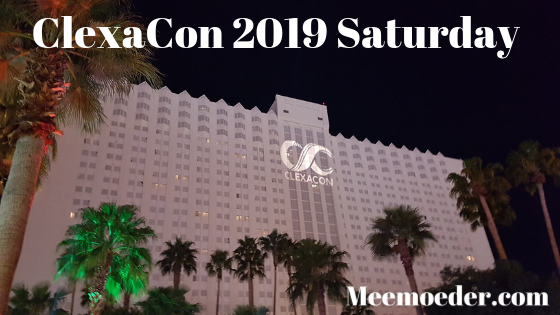 I went to two panels on ClexaCon 2019 Saturday but I spent most of this day holding interviews.  I actually had a few exclusive ones and there was a press room interview with One Day At A Time that I visited. In this blog post, I will tell you all about this day because it was stressful and truly heartwarming at the same time. I recommend watching the video below this image too.

An interview with TWENTY The Web Series on ClexaCon 2019 Saturday

As you may have read in my last blog post, there was a filmmaker mixer on Friday evening. I ended up talking to Lily Richards and Caitlin Combe of TWENTY The Web Series. I was so happy to bump into them because I think their show was brilliant and last year, I didn’t have the chance to tell them that. We ended up talking, and they agreed to do an interview with me. We scheduled it at 9 AM the next morning, so I had a few hours to prepare questions and then go to bed to be all refreshed for this interview.

I’m really happy with how it went. As with any interviews, I was nervous in the beginning. These women were so warm and happy to talk, though, that that we had an amazing time. I left with a really good feeling. I can’t wait to show you this interview, which will be in a few weeks.

Then, it was time for the Nyssara panel. I have never watched Arrow, but the panel with Caity Lotz and Jes Macallan was so much fun that I decided to go to this one as well. Because Katrina ran on stage during the panel yesterday, I expected Jes to crash Katrina’s and Caity’s panel too. Well, I had to wait a long time, but after about half an hour or maybe 45 minutes, it finally happened. I laughed so hard. Also, I didn’t know Katrina, but I absolutely loved her personality. She had some quick answers, and I admired how she handled one particular attendee who, in my opinion, asked her obnoxious questions.

After this panel, I had to run to the press room again because Sheridan Pierce and Isabella Gomez of One Day At A Time were visiting. I was really excited about this one because I know Isabella is a very outgoing person and I wanted to discover what Sheridan was like. I love that she looks sweet but can stand up to Isabella with a single comment. The dynamics between those two are amazing.

Then it was time for the moment I was nervous for the most. I had scheduled an interview with the cast from Good Kisser. The reason I was so nervous was that I’ve never had an interview with three people at the same time. Also, I hadn’t watched the movie yet. They couldn’t send me a press screener beforehand, and I could not visit the sneak preview because of the press room schedule. I knew the plotline, so I could ask some general questions, and I had to find out the rest along the way. Because three people were talking, it ended up going smoothly, and I felt like we were having a good time.

I feel really lucky because Julia Eringer also plays in Girls Like Magic. Girls Like Magic is one of those web series where I was actually waiting for a new episode every single week. So, I told Julia that I really liked the show. She told me that Shantell was on her way to Vegas and asked me if I wanted to do an interview with the two of them. Hell yeah!

So, after that, I started preparing questions. It was kind of hard because obviously, my press buddies were also in the press room and it’s not like we can talk every day. So, I was trying to catch up as well as prepare for the interview.

Then, I started to walk around because I also wanted to see the Cosplay contest. That room was so packed that I just ended up walking around exploring.

At 3 PM, Mika Epstein and Tracy Levesque from LezWatch.TV were having a data panel. I wanted to show my support by going because we often bump into each other at these cons and I really like what they do. Well, showing my support wasn’t really necessary because the room was quite full. I’m impressed by their presentation skills. It seemed like they were not nervous at all and had fun doing it.

After that, I saw Lily and Caitlin walking around again. I wanted them to go to Beyond Clexa’s booth, and they said that they were already planning on going, so we all walked to the booth together. There, they found out that their ship name is on the 2019 ship it shirt. They were ecstatic. It was beautiful to watch. We took a bunch of pictures together to celebrate.

I received a text from Girls Like Magic saying that they were ready for the interview. I asked them to come over to the booth. They absolutely loved the representation matters shirt and wore them for my interview. I found out so many new things. Things took a bit of a twist at the end, and I feel it was a very special moment. You can see for yourself.

After this interview, I went back to Beyond Clexa because Lanie and Avon had told me that Jes Macallan was going to visit their booth. We discussed that I would be filming that moment and that I would be taking pictures. Like I said earlier, I was so surprised by the warmth and enthusiasm of Jes. She’s such a wonderful person.

It was then time for Amber Benson’s panel. I was hoping that everybody could see what I saw in the press room the day before. She is witty and super smart, and she has a great message. I know that Dana usually does not want any sexy questions in her panels but Amber dove right in and gave us a few laughs. I think the entire audience fell in love with her during that panel if they weren’t already.

After dinner, I had to run to the red carpet event. It was one of my favorite memories from last year. Things were going to be different this year, though. We were not allowed to hold small interviews; we were only allowed to take pictures. I’m not a photographer, and there were a lot of professional photographers around me, so I decided to do what I do best: I recorded behind the scenes.

Fun fact: if you think the lighting in those professional photos is superb, I was standing on the red carpet before the event happened so that the photographers could test their lighting. Let me tell you: it is super uncomfortable to stand there having a bunch of people taking your pictures. Now I get it why everybody is so nervous.

Because we were positioned at the end of the red carpet, those nerves were already gone by the time they reached us. Also, there was no banner where we were standing, so they put a plant there. It was funny to see some people like Jes, Kat Barrell, and Emily Andras to just jump into that plant and pose. Then it became a thing, and we asked everybody to pose there. It’s super funny to see how people respond to that differently. As I was the last person, I also had the opportunity to say a few words to everyone. So, that made my day. Even though I could not hold interviews, this was still one of the most fun parts of the convention.

That meant that it was now time for the Ascension party. Last year, I decided not to drink any alcohol or caffeine during this convention because of my jet lag. This year, I was not too sure. Someone super nice, whom I already was friends with online, immediately invited me into the VIP area to join her table. I’m still overwhelmed by that table’s kindness. It also led to a lot of vodkas. I decided to just go for it because as a mom, you usually can’t party hard. Even though you have a babysitter, there’s always a kid waking up at 7 AM or earlier. I thought: “Why not? Just enjoy it!” And that’s what I did. Thanks, everyone whom I ended up partying with!