At Love Fan Fest, I was able to talk to Brianna Hildebrand. We talked about Love Fan Fest, queer representation, roles she wants, one particular role she would have loved to have gotten, and hagelslag. Below, I have written down what we talked about but if you just want to see the interview for yourself, you can find the video below this image. 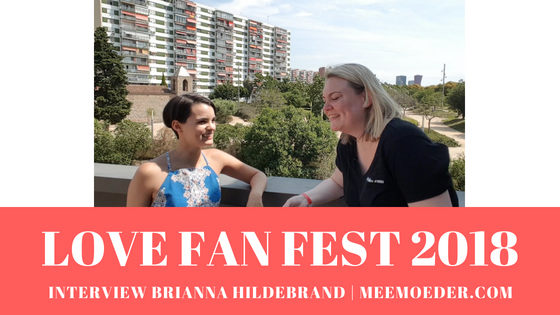 When I am waiting around for my interviews to begin, I start talking to Brianna’s girlfriend. I find out she has Dutch roots and soon, we start discussing pretty much every Dutch treat. I find out they both really enjoy hagelslag (chocolate sprinkles you put on your sandwich, in case you are wondering). So, I laugh and say it is very useful information for my interview with Brianna. I mean, that is really in-depth stuff, right?

The truth is, I have seen Brianna Hildebrand in Deadpool and Deadpool 2 and that is basically all I knew about her. I am really interested in finding out more about her because after all, Brianna’s character Negasonic Teenage Warhead is the first LGBT character to star in a superhero film that openly features a same-sex couple (her girlfriend is Yukio).  Brianna’s panel has helped me find out more about her, so I have some questions about that during the interview.

I may have scared Brianna a bit when I started the conversation with: “So, I have some inside information from your girlfriend.” When she hears it is about hagelslag, she quickly admits she eats too much of it. I think every Dutch person does so too, so there is no reason to feel ashamed 😉

During her panel, Brianna has said that she could not think of an LGBT character that she could relate to in her teenage years. I ask her whether that was because she felt there was no queer representation available to her or because she was not looking for it.

Brianna does not know: “There had to be at least one character on TV, right?” She thinks it was more because she used to read a lot and she really got into lesbian fiction. Given her response to when I say the name of Sarah Waters, I think it is safe to say she is a fan.

If she was able to pick any role, what would she like to play? During the panel, Brianna had said that she really enjoys My Fair Lady, so I bring that up. She agrees that she would definitely like to play in a musical. In fact, she reveals that she has auditioned for young Tanya in Mamma Mia 2. Since she did not get the movie part, she would love to do that musical on stage.

Brianna says that up until this weekend, she has never been to a con that is not comic related. That is interesting! So, how is Love Fan Fest so far? What panels would she like to see? Since Love Fan Fest has started Friday night and she has not arrived until Saturday, she has not really seen that much of the con yet.

Brianna wants to see Shannon Beveridge, but Shannon has already left because her panels were on Friday and Saturday. She tells me she watched all of Shannon videos when she was in high school so she was super excited to meet her at the premiere of First Girl I Loved. She texted Shannon to meet up but alas.

Brianna Hildebrand will be in a new short film

During her panel, I heard that Brianna has a small project coming up. It is a short film for Awesomeness TV. In it, she plays a character with severe OCD, who meets a love interest.

I ask her if it was hard for her to get the OCD part down. She calls it a process: “There is something about physicality that it difficult for me. There are a few moments when she is stressing about different things. To physically stress is difficult for me, I guess [laughs]. In the face, it is easy but then you realize that your body is not doing anything. It is just a lot to think about.” She does call it a lot of fun. “When you get into the swing of things, it gets easier.”

Does she take the physical stress home with her if she is focusing on it the entire day? Fortunately, she does not: “I am not method in the sense that I will stay a character.  I do like to have private moments for a character. So, I spend a lot of time giving her private moments, which is literally just me by myself acting by myself when I am alone, you know? It gets you more comfortable with the character.”

So, make sure you check out the short when it comes out. I am excited about it. Are you?

At LFF, Brianna Hildebrand discussed coming out too. I have a video as well.

This interview with Brianna Hildebrand is the final Love Fan Fest interview I have for you. There will be some small videos added to my YouTube channel the following weeks so make sure you subscribe if you have not already. Below are some more Love Fan Fest videos. They include my interviews with Melanie Scrofano, Kat Barrell, Dominique Provost-Chalkley, Natasha Negovanlis, Elise Bauman, and Gaby Christian.