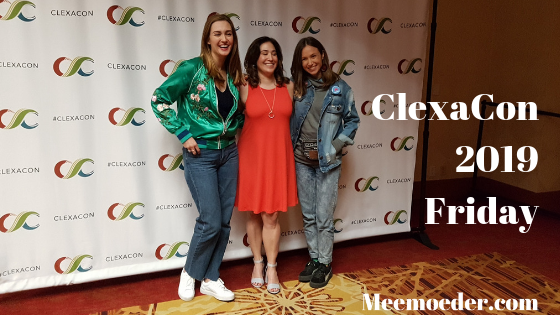 In this blog post, I talk about the things that I have seen and experienced on the first day of ClexaCon 2019. Last week, I talked about the panels by and on BiPositive Podcast, Nicole Pacent, Queer Representation in Burlesque, One Day At A Time, and Avalance. This week, I discuss some of the other fun things that happened on 2019 ClexaCon Friday. I have added a video that I recommend watching if you want the full experience (don’t forget to subscribe!). I hope you enjoy it!

After the Avalance panel, which ended on an emotional note as you may have seen, Jes was scheduled to come to the pressroom for an interview. But we all knew that she needed some time to recover, so we were just waiting there for her to show up when she was ready. Luckily, we didn’t have to wait too long, and she was happy and upbeat when she entered the room. She blew me away on stage during the panel, and she did it again in the pressroom. That woman is truly something special! Fun fact: on her way to the pressroom, she chatted with Katrina Law, who crashed her panel with a ‘Nyssara 4 life’ shirt.

After this interview, I meant to go to the Earper meetup. As I was on my way, I met some lovely people who follow me. They actually just came from the meetup and told me it was over. Oh well, that happens with these busy schedules. I guess we turned it into a micro meetup?

Last week, I said that Jes was one of the two biggest surprises for me this con. The other one was Amber Benson. She has humor, and she is opinionated. She understands how everyone felt about Tara’s death in Buffy and how that death falls within the ‘bury your gays’ trope. Also, she explains how the team behind BTVS has learned from it.

Usually, we have to wait, and the interview starts in a rather rushed way. Amber came in five minutes early, and so I walked over her to talk to her after setting up. I found out her boyfriend really likes stroopwafels and so I gave her one to give it to him. I later heard she ate half of it too and loved it, ghehe.

The interview with Wynonna Earp was rescheduled to a later moment. All of a sudden, the room was PACKED. I mean, there hadn’t been that many people all day. Because I had just interviewed Amber, I still had my front row seat. How very lucky I was!

I expected it to be crazy with questions since it was so crowded all of a sudden, but when the interview started, I indicated I had a question and immediately was granted permission to ask it! I said this on Instagram too, but it felt like a moment of growth for me. Last year, I was in the back, observing more than joining. This year, I opened the busiest interview of them all!

I asked Kat about Pooched, and her response was so lovely. I don’t know what I was expecting but not that she thanked me for asking about it.

After the interview with Wynonna Earp, I had to run to the film festival part of the con. Friday evening, there was a social event with the filmmakers. The filmmakers were showing their films or the first episodes of their upcoming web series, such as Passage and BIFL. Also, there was a sneak preview of Good Kisser.

As you may have seen, I reviewed Good Kisser a few weeks ago, and at ClexaCon, I was able to interview the cast.  At the mixer, I introduced myself to the cast so that we already knew each other before the interview on Saturday. That makes things slightly more comfortable!

TWENTY The Web Series was also present. Last year at ClexaCon, I saw Lily Richards a few times, but it was at the uncomfortable moments such as the restrooms, so I ended up not talking to her. That was my one big regret from ClexaCon 2018, so when I had the opportunity again, I made sure to tell her how much I loved the show.

I ended up talking to Lily and Caitlin for a while, and they agreed to do an interview with me. So, the next morning at 9 am, we were already working together. That was special! I can’t tell you precisely when you will see this interview, but I promise you within the next few weeks.

The event had a little red carpet event, so I have some BTS videos and photos for you in the video. The first one is actually Lily and Caitlin, and the red carpet still had to be sorted out😉

Emma, who wrote and directed the short film The Date, was also at ClexaCon. A few weeks before ClexaCon, she and her co-writer Hansof stayed at our house because The Date was showing at the Amsterdam LGBTQ film festival. So, I wanted to catch up with her on camera to find out what the screening was like. Because of the One Day At A Time panel, not a lot of visitors came to the film festival but the ones who did show up gave a great response to the movie. I loved hearing that others enjoy this short film as much as I did!

On Saturday, I had two exclusive interviews and a cool pressroom interview with ODAAT, visited some fun panels, recorded at the red carpet event, and visited the Ascension party. I will tell you all about it in my next blog posts!

In the meantime, you can read these ClexaCon blog posts (with videos!):