This week, I will tell you all about the second part of Love Fan Fest 2018: the Love Fan Fest Photo Shoot and Opening. Saturday morning, I was going to try to get into Love Fan Fest for the second time since my press pass was not available yet on Friday. Because of that, I had missed Shannon Beveridge’s panel and I was a little nervous about whether or not I was going to receive it this morning. 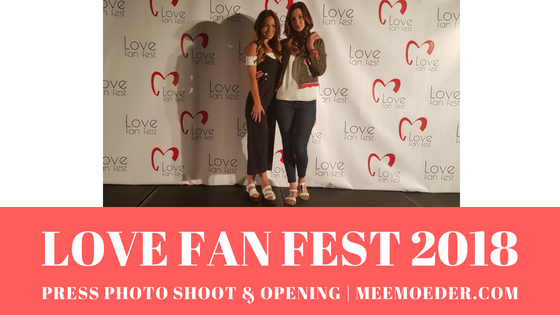 First, here are two vlogs for you! The first one is about the Love Fan Fest photo shoot and opening:

The second one focuses on two Wynonna Earp panels on Saturday:

We as press were told to be back the hotel at 8 am to pick up our press passes. I took metro line 1 to the hotel. It took me a little longer to get to the hotel than before because the metro apparently does not run that often in the weekend. That meant I was at the hotel at around 8.15 am.

My press buddies had a look on their face and I was worried whether they were upset with me for being a bit late. I was supposed to have breakfast with them after picking up our passes so I thought that was it. Unfortunately, it was the same story as yesterday: nobody knew about the press passes and we were told to wait. That did not sound good.

After a while, we were told to go to the merchandise stand. When we got there, they did not know where the passes were. We were told to wait again. By now, there were about five more people waiting for press passes.

At about 9 am, we were pointed at. That made us hopeful. Then, the others were given their press passes and we were not. If you wanted to see me in a nervous state, that was probably the best time. After some running around and phone calls, our contact found a list with our names and we were finally granted the holy press passes. Can you imagine how relieved I was?

That relief lasted two seconds. “In ten minutes, all the guests will come down for the Love Fan Fest photo shoot and interviews. You are supposed to go to the main hall for that right now.” Whaaaaaaaaaaaaaaaaaaaaaaaaaaaaaaaaaaaaaaaat? I started to panic. I had nothing prepared. Yes, there were a few questions in my mind but if you have to go talk to actors, who have been asked questions a million times before, and you are new to this and you are recording it and oh yeah, you might also be a fan at the same time, you feel pressure.

I grabbed a peanut bar from my bag because I needed food to think…. I went back to ClexaCon in my head and I remembered how nervous I was for my very first interview and how completely unnecessary that was. “They are human beings too, they can be nervous themselves or they can be completely relaxed, just breathe!!” I kept telling myself.

Let me tell you, nobody is relaxed during those photo moments. I remembered the press room at ClexaCon and I could see it happen again at the Love Fan Fest photo shoot. The guests had to walk on the stage in the main hall, where it was completely quiet, and they were asking themselves: how do I need to pose? I tried to stay calm and not let the “OMG – OMG – OMG – OMG” in my mind shine through. I hope it worked :p

After the Love Fan Fest photo shoot, it was time for interviews. However, I was then told that we (the “special media”) were not scheduled for interviews now but that I would be texted when they had found a spot for us. I was on call. It felt good not having to do interviews right on the spot but at the same time, spontaneity is hard too.

Also, I was still in the room with my other press buddies, who were not scheduled for interviews either, when all these interviews were taking place around us. That kind of looked funny. So, I just started to record footage of the guests being interviewed.

When I came back from a restroom break, though, my press buddy was casually chatting with Melanie, Kat, and Dom, who had come to our chairs to relax and wait for their first panel. I felt weird just joining the conversation but all my stuff was right there so it was not like I could simply go anywhere else… Oh well.

I asked Melanie how crazy her schedule was and yup, it was as crazy as you can imagine. She said she had a great agent though, who looked after everything, so she would not get too uncomfortable. We all need sleep and food, after all. I met Melanie’s agent the next day: I can confirm she really looks after her 😊

Then, the guests left and all the visitors entered the main hall. It was exciting to see everybody so happy for Love Fan Fest to start. Loud music started to play and images of the guests appeared on two screens. That footage was shot at the balcony where I would have my interviews later (so keep an eye out for that 😉).

The audience went crazy with anticipation. Then, all the guests entered the room and went back to the stage. They were not told what to do at that stage, so it ended up being quite funny. Everybody but Melanie, Kat, and Dom had to leave again so that everybody’s program could start.

Love Fan Fest’s first panel was called the Purgatory panel, which meant that Melanie, Kat, and Dom were on stage together. At one point, Kat and Dom had to leave and the second panel started, which was Melanie by herself. What was cool about this event was that the panels were not moderated. They were simply Q&A panels. That meant the guests were asked the questions that visitors really want to know.

I did think a few times that the questions asked were not that respectful though. For instance, I heard somebody say something along the lines of “I wish everything/everyone was as beautiful as Mel’s ass” before asking her question. I wondered why anyone feels the need to say stuff like that. Luckily, in the very beginning, the guests could not hear the questions because there was too much echo on stage. This was fixed later during the day.

Another example is that in response to a question, Dom explained that she does not want to sing in front of a crowd because it makes her feel very anxious and then a few minutes later, another person asked her to sing. Maybe it had something to do with the language barrier?

On Sunday, I was lucky enough to ask Kat and Dom what they thought of the questions and they were genuinely very happy with them, so I guess it was just me or they missed those things because of the echo. Anyway, I thought there were some truly interesting ones as well that made them think very hard before answering.

After that, I walked around a bit to take photos and shoot videos of everybody waiting in line for their photos and meet and greets. I asked staff whether I could take pictures inside the rooms but I could not. I understood that but at least I tried for you guys 😊

Next week, I’ll talk about the following panels: WayHaught, Hollstein, Gaby Christian, and Shannon Beveridge. I also have some press footage from the autograph area, for which my press buddies and I had to work hard. Stay tuned and do not forget to follow me on YouTube!

PS Want to watch Wynonna Earp? You can get season 1 here and season 2 here.