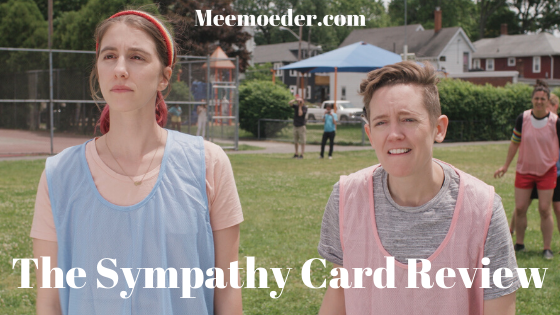 22 February 2020 / Greet / Comments Off on The Sympathy Card: Lesbian Comedy About Bad First Dates and Cancer

The Amsterdam LGBTQ Film Festival, or Roze Filmdagen, is taking place March 12-22. Because of the Roze Filmdagen, I know some new queer titles you can watch. The first one I can review for you is an American comedy: The Sympathy Card.

In The Sympathy Card, Emma has lung cancer and it’s not going well. She presents her new wife Josie a deathbed order. Is that a thing now? Apparently, it is. Josie needs to find someone new while Emma is still around to approve of her choice. Josie goes on some bad dates before developing feelings for her florist Siobhan. Below, you can find what I thought of the movie. In de video, you can find a clip from the movie!

Before watching The Sympathy Card

I have to say that beforehand, I was a bit reluctant to watch The Sympathy Card. I have a personal history with cancer. Consequently, I try to avoid being drawn into super sad stories about it. This movie is described as a comedy, though.

The Sympathy Card is not very realistic

Let me start off by saying that the storyline is not very realistic. Not every choice made in this story makes sense. Many of your questions will be left unanswered. For instance, how does Josie end up being so bad at dates? It almost seems as if her date with Emma is her first date ever. Who was she before the opening of this movie?

The biggest issue I have with this whole idea is: how big of a sex drive do you expect your character to have when the one she loves is dying and she’s taking care of her wife until she dies? It’s already a stage of mourning. I think anyone who has ever lost somebody close to them can tell you that it’s not your peak moment. Whether your wife orders you to flirt with people or not.

The bad dates are hilarious

Forget the unrealistic part of the movie for a second. I thoroughly enjoyed watching all the bad dates. It’s reassuring that there are people out there who are worse than me.

Not every actor is as good as the other, but I enjoyed Josie’s responses and the moments she’s talking to herself, which turn already awkward dates even more awkward.  I may have a crush on the florist now too, even though she has some tricks up her sleeve as well. And some sexy scenes are, well, sexy. So, despite the many questions I had, the surprises that come your way and the awkward moments kept me watching the movie until the end.

Have you had enough of watching coming-out stories? Have you had enough of watching teens or college girls? If so, the Sympathy Card might bring something new to the table. Instead of a coming-of-age movie, it’s about the end of life. If I had to guess the characters’ age, I’d guess they are in their thirties. It’s about a married couple deciding how to live their (short) lives together from now on, rather than a wedding being the final event in a movie. Those are all things you don’t see very often in movies from our community.

Where can you watch it?

On its website, the team states that they had a festival run last year and that they hope to bring the movie to more festivals this spring. On the Facebook page, you can read that The Sympathy Card will be shown at the Roze Filmdagen and Melbourne Queer Film Festival in March. You can also find the movie on Twitter and Instagram. I suggest you follow those accounts to stay up to date about festival dates. Hopefully, you will soon discover when and where you can watch the movie online.

ANNE+ Season 2: Why You Want to Watch the New Season