Rafiki: A Lesbian Love Story from Kenya with a Happy Ending

16 January 2019 / budgetvertalingonline / Comments Off on Rafiki: A Lesbian Love Story from Kenya with a Happy Ending

Rafiki: A Lesbian Love Story from Kenya with a Happy Ending

What do you think when you hear that there is a lesbian movie from Kenya? Is that even possible? Homosexuality is illegal in Kenya, so my biggest fear was that the movie was going to be full of hurt and pain, with no hopes of a good future. Can you imagine my surprise when I found out Rafiki actually has a happy ending?! This movie is wonderful, and I want to share with you what I liked about Rafiki and where you can watch it. You can read the blog post but you can also watch the video below this image. 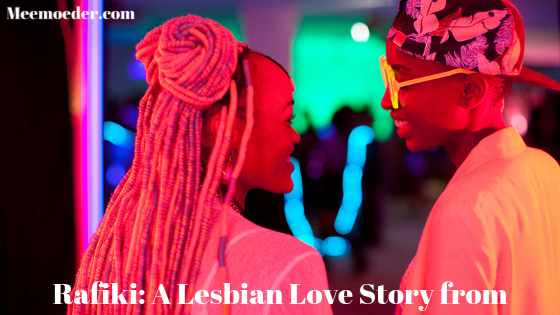 Let me first tell you that you will have lots of feelings. Knowing the situation there, I was constantly scared for Kena and Ziki. You follow Kena, so you’re more scared for her as you see her in more situations.

The moments when she talks to friends and families, you are constantly wondering whether they are going to ask something or whether Kena reaches a point where she can’t take it anymore and yells out something. For instance, she is not “the only gay in the village.” There is a gay man, and everybody knows about him. Her friend laughs at him, has probably beat him up at one point, and bumps into him on purpose.

When Kena and Ziki find moments together, you are constantly worried they will get caught. And as I was not familiar with Kenyan culture, I did not know what the consequences would be if that were to occur. That adds to the tension even more.

A lot of feelings

Yes, they do get caught. Yes, bad things happen. It is bound to happen; you know it will at one point, and you will feel every fiber of your body object when you see the consequences.

And you will have a lot of feelings about the two town gossips. My biggest question is: what does it bring them, to hunt them down like that?

Basically, Rafiki is a rollercoaster ride of emotions, but you can now be assured that you will not be crying for days. In fact, now that I know about the happy ending, I might want to watch it again just to be able to enjoy the story without having these feelings of tension the entire time.

The first thing I liked about Rafiki: the sheer fact that it is a lesbian love story from Kenya

Yes, critics who might say that Rafiki is another coming out and another coming of age movie are right. We get it: we want different narratives too. However, for a movie from Kenya to talk about a lesbian romance is huge. Homosexuality is illegal in Kenya and signs of it will be met with violent responses.

Director Wanuri Kahiu filed a lawsuit earlier challenging the censorship board’s ruling. She won, and the ban was temporarily lifted for seven days. This way, it could be eligible to be submitted for the Best Foreign Language film at this year’s Academy Awards. As a result, Kenyans went to the cinema’s “en masse” to watch it.

Can you imagine the impact Rafiki can have on Kenyan queer women watching this movie? The hope and sense of community it can bring? And it does not even end badly, which I had to experience often growing up. I am so very happy for Kenyan queer women to be able to watch a high-quality lesbian movie with a happy ending.

The second thing I liked about Rafiki: getting a glimpse of Kenya

Not all is bad about Kenya. As a queer woman, I find it easy to be against everything Kenyan when I know about the situation there for my community. Consequently, I was hesitant to find Kenya’s beauty in this movie. However, the colors, the people, the language, the accent when they speak English, the games played in public, its nature; there was just so much to enjoy for me in my first introduction to Kenya. I always love seeing different cultures and countries, so this movie being set in Kenya definitely adds something for me.

The third thing I liked about Rafiki: the chemistry between Kena and Ziki

The chemistry between Kena and Ziki is certainly there. It is well played. Being in such a restrictive environment, you find ways to find a connection with a person. It starts with looks and with small talk. I was actually surprised that they went on a date quickly. It was at night, in the dark, but it still took me by surprise that they found that opportunity.

I also think that because it is illegal, a lot of people are not used to seeing our community. Therefore, they might not recognize things. I think that if you put Kena in the western world, many gaydars will go off. Here, she constantly gets hit on by men. When she puts on a dress, she is described as a proper lady. People do not seem to see it.

When the two town gossips start staring at them, I think it is more because they are the daughters of two political enemies rather than because it might be a starting romance.

Where can you watch it?

January 23-February 3, International Film Festival Rotterdam (IFFR) takes place again and there, Rafiki will be screened.  Also, you can follow them on social media to find out when and where their movie will be screened. These are their Facebook and Twitter accounts.

According to a Facebook post, “Rafiki screened at over 100 film festivals and won 14 awards since May 2018, and this year is starting strong! In January you can catch the film in the US, Germany, Australia, and the Netherlands.” Therefore, there is a good chance you will be able to see the movie at a festival near you.

Want more tips on what to watch? How about The Date, Different for Girls or Anne+? Subscribe to my YouTube channel to hear my suggestions the moment they are uploaded!

The Start of Different for Girls (New Lesbian Web Series)

Brightening up my day with another pair of rainbow

Happy birthday to me! I wore this #swarovski set o