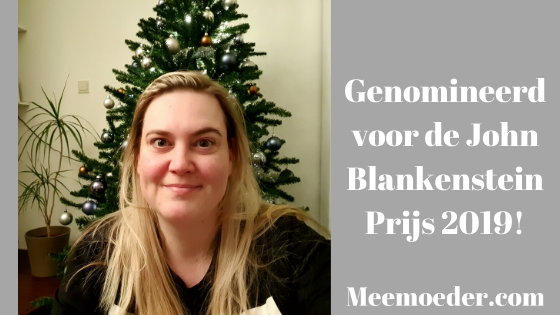 I’ve been nominated for an LGBT+ award in The Hague!

I’ve been nominated for an LGBT+ award in The Hague!

I’m so happy I can finally share it with you! I’ve been nominated for the John Blankenstein Prijs 2019 with Meemoeder.com! This is an LGBT+ award in my city of The Hague. It’s such an honor, and I would like to thank everyone who has recommended me as a candidate. Below, I will explain what the award means, what the process is like, and what being nominated means to me.

If you want to read the Dutch version of this blog post, you can find it here.

What is this LGBT+ award called John Blankenstein Prijs 2019?

With the annual granting of the John Blankenstein Prijs, the Municipality of The Hague marks the importance of opening up about LGBT+ issues and provides a platform for LGBT+ initiatives. Anyone who contributes to this is eligible for the award. COC Haaglanden is in charge of the organization of the award, which is the local chapter of our country’s biggest advocacy organization.

The ceremony is this Wednesday evening. Out of the twenty-two candidates, eleven candidates were nominated. I am one of those final eleven nominees. It is a great honor for me to be on this beautiful list of LGBT+ initiatives from The Hague.

The jury consists of Karin Blankenstein, Kasia Oberc, and Winston van Niel. From these eleven nominees, they have already selected a top three. This top three and the final winner will be announced by alderman Bert van Alphen during the ceremony. That’s pretty exciting!

The winner will receive an amount of €2,500 that should benefit the promotion of LGBT+ emancipation. Moreover, the winner can count on publicity for a whole year as an ambassador. I don’t dare to dream about what I could do with that prize money and publicity. That could really contribute to the quality and growth of my website and YouTube channel, which in turn would help in how I reach LGBT+ people worldwide. However, with ten other beautiful initiatives, there’s not a high probability 😉

Recognition with this LGBT+ award

It hasn’t been easy, especially last year, to keep Meemoeder.com’s website and YouTube channel running, to publish blogs in Dutch that are of use to (future) lesbian parents, and to publish blogs, vlogs, and interviews in English about queer representation in media. Maybe that’s why it feels so good that I get this recognition at the end of 2019. I feel supported by the people who nominated me as a candidate.

Not many people in The Hague know what I do. I mainly reach national and international LGBT+ people. That’s what makes this nomination so special to me; it’s an LGBT+ award in my own city. Whether I win or not, I want everyone to know how special it feels and how grateful I am!