I meant to publish this blog post a few weeks ago but I had to change my LFF content schedule somewhat due to unforeseen reasons and publish my interviews with Kat and Dom, Melanie, Elise and Natasha, and Shannon earlier. I prefer posting things in chronological order but alas. So, a few weeks later than planned, this post will be about Hollstein at Love Fan Fest 2018 and other panels later that Saturday, such as WayHaught, Gaby Christian, and Shannon Beveridge. I may also have been kicked out by security somewhere. Yes. It is not always easy to blog and vlog for you, dear readers! First things first, let’s delve into the panel of Hollstein at Love Fan Fest 2018. 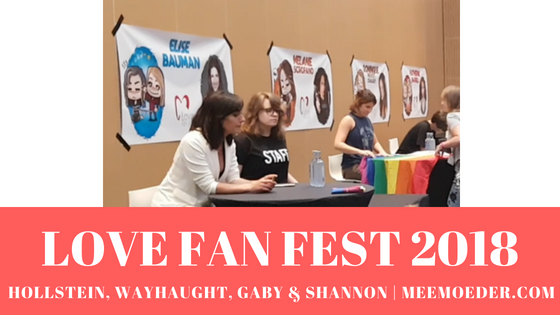 The first morning of Love Fan Fest was all about Wynonna Earp for me but around noon, there was another treat: Hollstein at Love Fan Fest 2018. I loved how Elise and Natasha clearly showed their respect and support for one another. It seemed that despite all these interviews and conventions together, they still hear new things about each other. For instance, Elise was talking about her projects behind the camera and how she was glad that it offered her a certain degree of freedom. Natasha replied with “That’s awesome!” and indicated that the audience should applaud for her more loudly.

I was also seriously impressed with the creativity of the questions, some of which led to hilarious answers and situations. For example, one question was whether Elise and Natasha could show how Laura and Carmilla would experience this visit to Barcelona. I was laughing so hard during Elise’s answer that I only recorded Natasha’s answer. I nearly missed Elise’s response to Natasha turning into Carmilla but I managed to record some of it. These moments are the reason I fell in love with (LGBTQ) cons 😀

After their panel, Elise and Natasha went to the big autograph room. At ClexaCon, I loved filming that. After all, how beautiful is it to watch fans finally meet their idols? I walked to the staff member at the door and explained that I was press and that I wanted to film inside. I was allowed in, recorded a small video of me explaining what was going on in that room, and then I walked to the lines of people waiting for Natasha and Elise.

When I started filming there, a staff member walked up to me and said that I could not film. I explained to her that I was press. She said “oh, sorry” and left. A minute later, security came up to me and said something in Spanish. As I did not understand, he decisively said “no press.” Yup, I got kicked out.

During Love Fan Fest, whenever Kat and Dom were on stage, there seemed to be at least some talk about a possible marriage between Waverly and Nicole. The fans obviously want to see something happen in that respect.

That did not seem to be enough. We were surprised by a beautiful proposal on stage. I do not know the names of these two lovely ladies but the look in the eyes of the one proposing was so very intense (the other one had her back turned to me so I could not see her eyes). It was as if they were completely alone, not on a stage with Kat and Dom right by their side and 400 other women in the room. Whoo!

After a short break walking around and having some food, I went back to the main hall. I have been receiving a few comments under my vlogs about how optimistic I continued to be even though this whole press thing was kind of hard. However, I can tell you that this was the moment when I was in low spirits. I was asking myself whether the trip was worth it. Therefore, I gave myself an option: am I going to be sad because of the way things are (not) going or am I going to do something about it? I decided to do the latter.

You see, our press contact was not responding and I realized the country code was not saved correctly in my phone. Once I had fixed that, I contacted her again. I asked her whether we could somehow get permission to shoot some photos and videos in the autograph room. When I was waiting for Gaby Christian’s panel to start, I heard we were granted permission for ten minutes right after Gaby’s panel, when Kat and Dom would start signing. How awesome was that?! That is when things started to go better and I was able to get better footage for you!

Even more awesome was that many visitors were waiting in line for autographs. That meant we could sit on the front row of Gaby Christian’s panel rather than on the floor. It was fun hearing Gaby talk about South of Nowhere and what it was like to take on that role fourteen years ago. To refresh my memory, I had rewatched the whole show two weeks prior. Can I just say she has a very pleasant voice to listen to?

Rhiannon Fish was also on the panel but honestly, I do not know any of her work so I was focused more on Gaby. They brought a friend, Mike Manning, who was Gaby’s fake husband in SHE4ME’s video, he told us. I wish I had realized it sooner but I also saw him on The Real World: D.C., in which he was struggling with his religion and his bisexuality as he had only recently come out. Powerful stuff!

I liked the mix of the panel; it allowed for a diverse Q&A.

Autographs by Kat and Dom

Right after the panel, my press buddies and I went to the autograph room. A long line had formed as many guests were signing at the same time. I showed the staff member at the door my texts, saying we now had permission to be inside for ten minutes. After a debate with other staff members, we were allowed to enter the room to wait for our press contact.

Inside the room, security came back to me immediately as well as some other staff members. We showed my texts and everybody clearly watched us until our contact arrived. She first had to make a few extra phone calls. Then, we were granted permission to shoot videos and take photos for ten minutes. Dear readers, this footage cost me quite some sweat so please enjoy it thoroughly 😉. Also, please do not share it (edited or unedited) without a direct link to my website and social media account.

Because of this opportunity, I missed the first part of Shannon Beveridge’s panel. I have not actively followed her over the years but I have seen some videos of her on YouTube. So, I really wanted to hear what she had to say and what the visitors wanted to ask her. I thought it was funny that she was clearly more comfortable in her videos that on the big stage. Every now and then, a question made her shy. She was asked what she first notices in a woman, for instance. Lol, imagine having to answer that in a big room full of people :p

She has such a big platform with over 600k followers on YouTube.  I am just starting out with YouTube and I find it really interesting to see what you can achieve with it. The past three weeks, my videos have been gaining traction. As a result, I have been getting quite a few private messages about how much these videos mean to people. Can you imagine how much you can help people if you have that many followers? Also, can you imagine how much pressure that adds to your work? That (im)balance continues to fascinate me!

After the panel, at the end of the program, I saw our press contact. I asked her if there were going to be any media opportunities or whether this was it for us today. She asked whether we wanted to talk to Shannon Beveridge. Eh, YES!

So, you can read what it was like to meet Shannon Beveridge and watch my interview below. Please do not forget to subscribe to my YouTube channel and share the video if you like it! I promise you there is more to come. I do not want to give it away entirely but I may also have an interview with someone already mentioned in this blog post!

So, was Hollstein at Love Fan Fest 2018 your favorite or were you there for someone else? Let me know in the comment section!