At LoveCon’, Annie Briggs had a few minutes to talk to me. I was able to ask her some of my questions and some fan questions. As a result, we laughed about toilet paper, she learned about a Carmilla petition, and I heard about her new projects. Below is a part of the interview. You can find the rest in my video, which is embedded under this image. 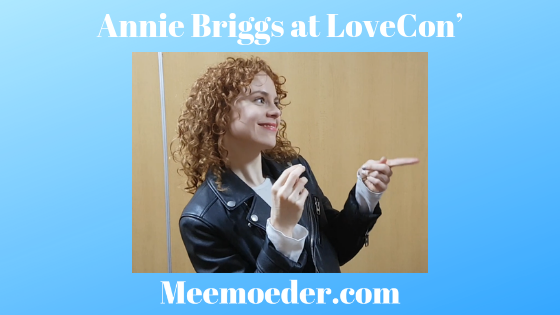 Me: “How is LoveCon’ so far and how does it differ from ClexaCon London?”

Annie Briggs: “It has been great. There have been some repeat faces, which is great, to see people again and obviously meeting new people is wonderful too.

I’m not fluent in French. The language thing is the biggest difference, but it hasn’t been problematic at all because there have been translators and we sort of make it through on either side.”

Annie Briggs: “Yes, it’s coming. We’re all so excited. I can’t believe there’s a con that is exclusively for Carmilla. It’s going to be great.”

Me: “And it has been created by fans.”

Me: “Does it feel extra special that it’s in Toronto?”

Annie: “Oh yeah, I think it makes so much sense. It is sort of the home base. Well, it’s interesting, because they say it’s the home base of Carmilla.  It is where the creators and cast are based.

But I don’t know, Carmilla and especially the fandom is so global to me. It feels like a global family in a sense.

But I think it’s going to be really great to have that happening in Toronto. I think it speaks to the power of when fans get together and decide that this is what they want to have and make it happen.”

Me: “A while back I saw Luvvie, and I thought it was brilliant. I was wondering while watching, how much of it is true for an actor, not the working kind.”

Annie: “Man, it’s so funny. That was definitely my life at that time. Careers develop in different ways for different people. There’s no sort of formula for how an actor navigates their own career and work experience.

I will say that it’s a pretty universal experience for young actors. You spend the bulk of your time auditioning as opposed to working.

Audiences only see the actors that make it on to the stage or on to the screen. To get there, they have been up to hundreds of other actors who have had to put in the work to go through the auditions multiple times and don’t end up booking it.

There’s this funny thing where I think most people don’t realize that the bulk of actors, the jobs that we do is this completely behind the scenes thing.”

Me: “I thought the toilet paper was a nice touch. I could have used that tip when I was a student.”

Annie: “I am almost ashamed to admit that that definitely comes from personal experience.”

Me: “On your panel, you said something about Clairevoyant season 2 and not getting some funding. Is there any way we can help?”

Annie: “Honestly, if you’ve seen the show and you like it, share it with as many people. Still, on our season 1, getting as many views and shares and traction on it as possible only helps us show people that there’s an audience for this and that people want more. If you communicate that, it does help us to generate the finances to get the second season going.

What Natasha was referring to was yes, there was one funding body that we applied for but didn’t end up receiving. But that’s ok because we are applying to other ones and that’s sort of how this kind of stuff works in Canada. It’s through public funding; we do have great systems for that. It does mean that you have to go through the process of applying against so many other people. It’s a bit of a Hunger Games situation.”

We were running out of time, but I did manage to stretch the interview a minute or two and sneak in two fan questions. Make sure to watch the video to hear those questions and answers as well as some other questions that I’ve asked. Also, watch her new short film Ruth.

PS Have you read and watched my LoveCon’ interview with Kaitlyn Alexander?